How to Grow Dahlias 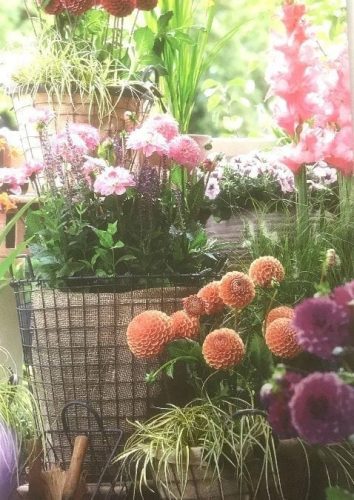 Dahlias have been grown in Britain for centuries and were a staple of the traditional early to mid twentieth century gardens based upon the Victorian school of gardening. Towards the end of the 20th century growing Dahlias became old fashioned and boring. That’s all changing now.

The amazing benefits of Dahlias are being appreciated all over again. Dahlias flower for four to five months, repeatedly. They look great in borders, the short varieties grow in pots on the patio and you can have fresh cut flowers from your own garden all summer and autumn.

The new country living goddesses have been promoting Dahlias as cut flowers in strong colour mixes that will stun you and your visitors and the frequent ‘flower farmer’ articles in the weekend glossies, always feature Dahlias.

Tall Dahlias might need staking in open sites. If grown amongst shrubs and other perennials they will probably support each other.  Dahlias can be prone to slug damage especially when young so be prepared.

Dahlia tubers are sold as tuber, that is swollen storage, usually in singles in colourful packs from February to April. You buy a Dahlia tubers as dormant tubers in the winter season. To grow them for summer the tubers are potted up into large pots in March or April. March potted Dahlias will need somewhere warm and protected to grow such as a heated greenhouse or a conservatory. The later you pot the less heat and protection you need and in mid April you can more than likely grow the pots on your patio, protecting from late frost before planting in your garden.  Traditional (and wise) advice is to grow in your garden after the last frosts. These might be April in Cornwall but early June in the north. They are then ready to be grown for the summer flowering season. Dahlias are not winter hardy so at the end of the summer the tubers are stored in a frost free place to be grown again the following year.

Mix into the compost in the final planting Gro-Sure Slow Release granules. These clever granules feed for up to six months and are a high potash feed. This will produce the most flowers.

Eventually summer fades, the days get shorter and temperatures drop. Your Dahla plants will battle on as the autumn progresses and often still look magnificent into November. To store the tuber for the following year you can either place the pots or baskets in a greenhouse or conservatory, stop watering them and let the compost dry out.

Alternatively leave them outside and let the first hard frost kill the tops. It’s not attractive but it does the job. It’s essential then that you ‘dig’ the tubers up, bring them inside, letting them dry off on a windowsill, kitchen tray or greenhouse staging. Once the remaining compost dries and falls off with the old roots, the now dry tubers can be stored in paper bags in a frost free place until February or March for you to start again. Paper bags are essential. The tubers need to breath. In a polythene bag they won’t. Write the colour or variety, if you’ve noted it, onto the bag so you can have successful colour schemes in future summers.

Dahlias are part of the Summer Bulb range. Other summer flowering bulbs include Lilies (Lilium), Tuberous Begonias (see link below), Nerines & Freesias. We also offer a range of mixed collections for attracting butterflies and bees.

Find out about Begonias