We help out with advice and plant selection at Wentworth Woodhouse 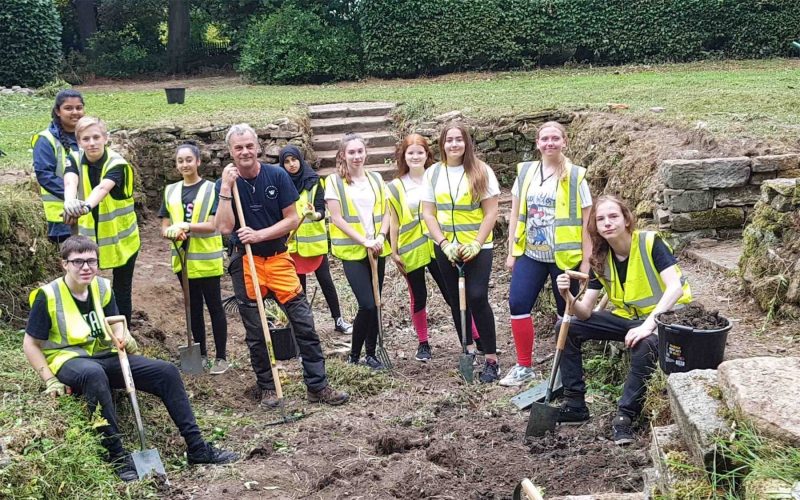 Teens get stuck into gardening tasks at Wentworth

They found no less than 60 willing hands thanks to teenagers on the National Citizen Service scheme run by Rotherham United’s Community Sports Trust.

A group of 30 young people from across the borough got stuck into the backbreaking task of digging out the sunken garden and reorganising the beds in the rose garden at the house now being restored for the nation by Wentworth Woodhouse Preservation Trust.

NCS is a youth development programme running across the UK which empowers young people aged 15-17 by engaging them in residential and social action activities during their summer or autumn holidays.

The NCS scheme in Rotherham brings together young people from different backgrounds and areas of the borough. During one of their four summer NCS weeks, teams tackle projects that will help their community and two of their current teams chose to help out at Wentworth Woodhouse.

“Our sunken garden, which dates from the Victorian era, was totally overgrown. None of the stonework was visible anymore,” said Andy. “Our Georgian rose garden was also in a sorry state. We and our regular volunteers are so busy maintaining and restoring the gardens we didn’t have time to tackle the task.”

The NCS participants picked up their shovels and wheelbarrows, got stuck in and cleared weeds and earth to reveal the sunken garden and ensure paths between rose beds were wheelchair accessible.

Some of the young people, like Scott Smith, 16, of Wath, Team Assistant Rosemary Riley, of Eastwood, and Charlotte Flear, 16, of Brampton Bierlow, already knew of the Grade II listed mansion.

Charlotte said: “I grew up visiting the grounds with my parents. I always felt it looked like a princess’s castle and was really pleased I was coming to work here.”

But many others were finding out about it for the first time. Archie Wordsworth, 16, of Conisbrough, said: “I wanted to do something useful during the long holiday before starting at college. I had no idea the house existed and I’m glad the NCS scheme has introduced me to it. It’s been really hard work but it’s great to feel you are doing something useful for such a beautiful place.”

Added gardener Andy: “The NCS team really got stuck in. It was hard work but they enjoyed it and their enthusiasm was wonderful to see. We are so very grateful to them for their help.”

The 30 young people who signed up to NCS Rotherham this summer have already experienced a week away from home taking part in outdoor activities in the Lake District and have had a taste of university life by staying in Sheffield Hallam University accommodation.

Said Ruth Dobson, NCS Recruitment Officer at RUCST and Wave Leader for Wave 4: “The team got to choose where they wanted to carry out their Social Action Project and voted to make a difference in the Wentworth Woodhouse gardens.
“They worked very hard to make a real difference. We are very proud of them and also very grateful to Ferndale Garden Centre at Dronfield and N Fulwood garden supplies of Munsbrough Lane, Rotherham, for kindly advising on plant selection for our young people to work with.”